Magic Van Ryad is the third cross we have bred from his dam, Tall, powerful, stately – perhaps the most similar son to his sire from all our stock. Thus he earned the ‘Van Ryad’ name, only the second in our barn. Come see this exciting youngster!

Both of his siblings have sold; this colt is the only offering available from Maplewood at this time. He’s Breeders Sweepstakes Nominated, Showy, Necky, perfect legs, with fancy attitude and motion. Make him yours to train in almost any direction you wish to take him. He’s a yearling 2021 and ready to get prepared for the showring. 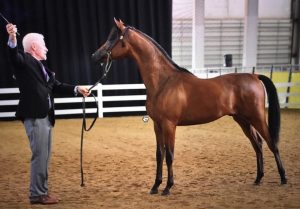 Elegant and stately, with Bey Shah in his lineage three times, looks like a refined, younger version of this Legend. He was Top Five in a competitive class of Yearlings at Regionals, third on the cards. We anticipate this colt to be of substantial size. His personality is huge, his carriage is proud; he flags his tail and captivates his audience! This colt will be something special. Both his Sire and Dam are Champions in their own right, these genetics are strong. He’s Breeders Sweepstakes nominated.
Private Treaty 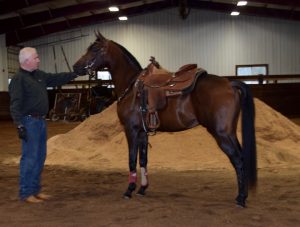 Madison MF carried the farm’s flag to a Unanimous Win at Regionals as a yearling. Brian Murch, a Judge at the event was heard to say, you won’t find a more balanced horse! Madison is still growing and is already a mare of substantial size and presence. She is bigger than most average stallions and fills the room with her oversized attitude. The energy level this mare is capable of – every day – is a tribute to her father’s undefeated ‘Liberty’ status, (the only horse to win Scottsdale Liberty with perfect score on all three cards) and her dam’s stamina, (two Tevis Cup contenders from her progeny).

Garcon Noir MF displays early signs of being a great English athlete. He is exactly what his pedigree predicts, demonstrating the blood runs true. Drawing from the Polish strength of MHR Nobility, *El Ghazi, and *Bask from his sire, we also see the supreme atleticism of his dam’s sire Medalion, and the beauty of Negatraz and Noir’s granddam, the great *Gitara, written all over him.

He is the image of his sire, nearly black bay in color, with a familiar hooky neck, cadenced trot, prominent withers, athletic shoulder, and built to drop his hind end and throw dirt backwards. This colt excites us with focused potential in the English Pleasure divisions.

A study of pedigrees would turn up pages of accolades for each of the individuals in the first four generations of his lineage. His sire, U.S. National Park Champion IXL Noble Express+, has produced some of the most notable and head-turning performers in the showring today. Two of them – Black Daniels and Expressly Bella – caught our eye at Scottsdale, enrapturing the crowd and convincing us of the source of their explosive talent. We paired the extreme athletic ability of IXL Noble Express with the unique qualities we loved in *Gitara PASB, which are so evident in Garcon Noir’s dam, Ginuine, the enchanting Medalion daughter.

The fluidity, extreme motion, and work ethic coming from Noble Express, coupled with an eccentricity and airs-about-one’s-self that Ginuine rightfully possesses, combine magically to make this colt special.

Raishea delivered a terrific 2014 colt by  *Maddox Van Ryad . We named him Matrix MF, and he represents four generations of Maplewood breeding.

Raishea is special – the only granddaughter of BOH Romance, through BOH’s daughter Nina Ricci MF. Raishea is our most important link to this dam line. Named after her great-grand dam Gaishea, both a U.S. and Canadian National Champion Mare, this filly brings the highly coveted Gainey Dynasty into our mix. Paternal grandsire Gai Monarch’s talent under saddle matched that of his halter fame. Maternal grandsire Hallelujah Bey //+ contributes the known qualities of the Huck lines, giving us our third generation of calm, level headed, useful and talented horses walking the aisles of our barn. Sire Noble Rhyton contributes incredibly dry, thin and vascular skin, large eyes and tightly placed ears, as well as an exquisite front end with a long and perfectly arched neck. Rhyton’s dam *Cesarzowa, of the famous Milordka female family– famous for her chisled head, fertility, and ability to produce well with every sire presented to her – offers hope that we have a new treasure in her granddaughter.

Raishea is an exciting addition to our broodmare band; she’s broke to ride and serviceable for pleasure as well!

Congratulations to Beloved Horses and Sarah Carr on the recent purchase of Graff MF. We look forward to his Reining career!

Graff’s grand dams *Era (Carycyn x Eskapada by Nabor) and *Gitara (Eskimos x Gildia by El Paso) are two of the cornerstones of our breeding program. *Era proved her talent as an exceptionally gifted park horse before finding her way to Maplewood, while *Gitara exhibited her strengths in the halter arena, where we campaigned her to multiple wins at an advanced age. Adding to that is the tremendous athletic ability one would expect to see in a pedigree rich with the blood of the immortal *Bask, as well as two crosses to both Comet and the glorious Eskapada. Like his sister Gala, Graff exhibits the beauty and tremendous motion that comes from all corners of his pedigree. He is sure to be a future star!

A descendent of *Gitara PASB, he most obviously carries the gene for her legendary neck – arched to perfection. Negatraz characteristics have followed this young colt as well, with huge black soulful eyes and tons of mane and tail. He’s now going under saddle with great working attitude and with plans to be shown. Trainers have suggested with his agility and cat-like speed he’d be a perfect purebred Reining Futurity prospect.

Riviera MF represents Maplewood’s successful infusion of more Comet blood into our breeding program and efforts to create a replacement for our beloved foundation broodmare *Era. She produced well for us, including the exceptional trotting machine Erykk MF, and we look for Riviera MF to carry on the contributions of her grand dam.

Riviera’s dam Cerrah was leased by Maplewood based on her strong resemblance to *Era, and based on that fact that, like Erykk, Cerrah’s dam is a *Carycyn daughter. Cerrah’s pedigree includes some of the most famous Polish trotting stallions in the breed, Gdansk and *Wiraz, with intense linebreeding to *Bask, Comet, Trypolis, and Wielki Szlem. Additionally, Cerrah traces in tail female to the fantastic US National Reserve Champion Futurity Mare Four Winds Kitkat, the foundress of a line of an incomparable show horses that includes the more recent US National Champion Mare Maggdalina.

Triple Comet, triple Bask with four lines to Wielki Szlem – the concentration of Polish athletes in this filly’s pedigree is hard to find.

Danskk MF is a force at Maplewood. Big, bold, solid – this young colt is very willing to go around the ring with a steady and soft head set. He exhibits all of the traits we have come to expect in Erykk’s foals, including an upright neck, a sharply sculpted head that is set off by large, luminous black eyes and expressive ears, as well as a strong, smoothly constructed frame and fantastic movements at the trot.

His dam, Medaly, brings to memory some of the great historic English Show mares of the breed and introduces lines to Comet, Aloes, and Nabor, as well as additional Forta blood – a mare renowned for her exceptional performance production.

Congratulations to Rex and Devera Miller of Agri-Tech Design. We know you’ll love what this boy can do.

Sparrow MF represents an intentionally sought after extension to our Polish-focused program. His sire, international Champion *El Nabila B, brings Russian and Crabbet lines into play and contributes his large, luminous, piercing black eyes, dry desert look, and powerful structure. His dam is by the fabulous Echo Magnifficoo and out of a Benraz++// daughter; she is double Gamaar bred.

Every line of Sparrow’s pedigree contributes an attribute we wish to pass on, and he IS his pedigree. You see in his flesh what his blood dictates. An elegant young colt, growing proportionately and correctly, he earned a Region IV Reserve Championship in the Breeders Sweepstakes Yearling Colt division. He is carrying a bit now and going well in the lines. His kind, easy going and confident disposition is a pleasure to be around. Sparrow is a Breeders Sweepstakes entry.

With the arrival of this special colt, Maplewood goes back to its foundation. G is our fifth generation, tracing to the first mare we purchased under the guidance of Greg Fratt (then the Patterson’s breeding manager).

To complete the circle for today’s show horse, we went back to Afire Bey V, who had found a niche in our program bred to our Polish mares. This would be our third Afir Bey V foal. The foals from crossing Erykk’s paternal sisters to Afire Bey had proved our belief that this cross was a good bet. As it turns out – G underscores the compatibility of generations of Polish warhorse breeding of might-and-bone matched with the elegance of Afire Bey V’s predictable “front end.” One look at G and we knew he inherited both.

G’s neck was so perfectly structured to wear a bridle from his early days that it was difficult to find a foal halter that fit. His neck bent so tightly at the poll and his head nestled so perpendicularly that even a knotted baby halter would fall to the base of his neck and restrict his freedom to exercise.

He is undefeated in Oregon Yearling and two-year-old Futurities and was a Top Five Region IV Breeders Sweepstakes Yearling Colt. Always bright, always fired up and gifted with Afire Bey V’s show ring look, G is ready to be in a Nationals-bound show string. He is a Breeders Sweepstakes entry and is eligible for the AEPA 3-4 year-old Performance Futurity.