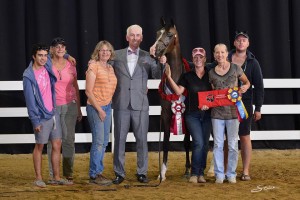 Madison MF ( Maddox Van Ryad x Benraz Magnifique by Echo Magnifficoo) was the unanimous  Region IV Champion Arabian Yearling Filly on Saturday, June 27. She was also Champion Arabian Yearling Filly Breeders Sweepstakes on Friday.  Beautifully trained and conditioned by Tara Boresek, she was shown to both wins by Mike Hartman. Thanks to everyone who helped make this happen.

Retired from production after giving us our replacement mare Rhegan MF, Maplewood decided to sell this rare daughter of *El Paso when we couldn’t get her in foal again. Revlon MF is proudly owned, loved, ridden, and enjoyed by Rhoda and Catrina Bazen.

It is with great sadness that we acknowledge the loss of the exceptional Romantykk. The most beloved mare at Maplewood, Romantykk graced us with her charm, dynamic presence, and kind nature for 17 years. Her classic breed type, dramatic movements, and ability to produce these traits helped us to define our vision for the ultimate Polish Arabian mare.

The dam of Roscoe Divine and Rapachini, she was the most talented mare we have owned. Her hackney-like trot including extreme hock action translated into serious motion for subsequent generations. This mare was well over 15 hands and had incredible presence.

Her dam, BOH Romance, was Maplewood’s premier broodmare for many years and was considered by many to be the most beautiful daughter of Negatraz. An aristocrat dam of champions, her best produce include US Top Ten Revelry, Regional Top Five Rockette MF, Western Pleasure Champion ATouch Of Romance, halter champion Rebok and our precious broodmares Revlon MF and Nina Ricci MF.

Her passing marks the loss of not only our most talented broodmare, but also the foal we were most excited about, the treasured Erykk MF filly she was carrying.

For those who knew and loved Romantykk, her passing was a tremendous loss. We look forward to procuring this valuable blood in future generations through her maternal sister Nina Ricci MF.

The stunning colt Ex Parte MF is the only full sibling to Erykk MF and was originally purchased by Guy Benefield. 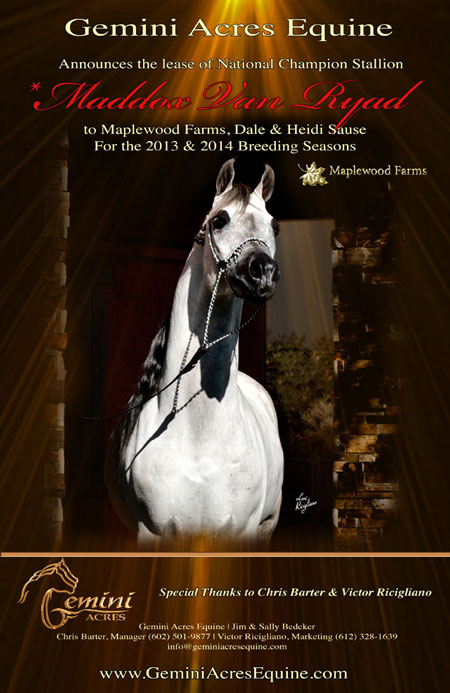